15 Spooktacular Flicks To Stream This October

The most wonderful thing about this month—other than the fall weather and pumpkin spiced everything—is the entertainment. While I’m usually a wimp when it comes to scary movies, this time of year tends to bring out the horror-lover in me. (Stephen King, anyone?) But even if you’re not a fan of being spooked, there’s no reason why you can’t get into the spirit of the season! In fact, my favorite Halloween-inspired movies fall under the not-so-scary category, which is why I’ve compiled a list that includes the best of both worlds. Whether you’re in the mood for silly, sentimental, or spine-tingling, we’ve got just the flick for you! And bonus: I’ve rated each film by its spook factor (1 being the safest and 5 being the scariest) so you’re prepared going in. You’re welcome, witches.

Without further ado, I give you 15 spooktacular movies to stream this month:

Recommended for: rainy Sundays with only one thing on the agenda—Netflix.

More kooky than creepy, this family is an absolute treat to watch every year. Wednesday Addams may or may not have been my role model growing up. I’m not sure what that says about me, but in any case, you’ve gotta love her sharp wit, impenetrable stoicism, and wicked sense of style. She’s cooler than cool, even at 11.

Recommended for: a thrilling double date with the boy, the bestie, and her beau. You’ll find out real quick who the biggest chicken in the room is. (Yeah, it was definitely me.)

Prepare to be scared. Similar to our previous pick, Oculus deals with dysfunctional family ties—but unlike TAF, there’s no humor involved. Quite the opposite, this horror-filled drama revolves around a brother-and-sister duo who set out to defeat the evil spirit that drove their father to the brink of insanity years before. Forget cheap thrills, Oculus is one terrifying mind game that’ll stay with you long past the movie’s end.

Recommended for: blissful background noise while you do your fall decorating.

What’s not to love about Michael Keaton’s Beetlejuice? He’s the only actor I know that can pull off disturbing, charming, disgusting, and hilarious all at the same time. Get up close and personal with the quirky villain (and baby Winona Ryder) in this old Halloween dramedy.

Recommended for: a night out at the cinema with your old man (Stephen King’s biggest fan).

While you can’t stream this flick just yet, It is the perfect excuse to hit up your local theater for a fun night out this October. Certified fresh by Rotten Tomatoes, this classic Stephen King remake covers all of the bases of a quality movie-going experience: Aside from the cinematically-pleasing visuals and stunning cast performances, the plot inspires the perfect amount of fear in its viewers (I only jumped once, but was constantly on the edge of my seat) and delivers a hefty dose of humor, adventure, and heart.

Recommended for: a day spent entertaining the young nieces and nephews (who refuse nap time).

Okay, I know what you’re thinking. Disney Channel’s Halloweentown is not a very good movie, all things considered. But at least the nostalgics of the world will be able to appreciate this one. I used to be obsessed with it, and I’d be lying if I said it doesn’t bring out my inner kid whenever I catch it on TV during October. It’s just one of those Halloween movies that will make you sentimental for your simpler Disney-loving days—and if you have young children around, it’s a win-win.

Want to delve into something a little creepier but still fun? Trick ‘r Treat might be your jam. I didn’t love it at first, but that’s mostly because the plot is kind of all over the place. The reason it made my list, however, is because of its deeply twisted obsession with All Hallows’ Eve. Give it a go and you’ll see what I mean.

Recommended for: organized sing-along sessions with your musically-inclined friends. If you can’t find one in your town, host your own!

Okay, so Sweeney Todd has literally nothing to do with Halloween, but when it comes to humor and horror, this Hollywood rendition of Sondheim’s gothic musical is the perfect combination of the two. Johnny Depp is dreadfully superb in his role as Sweeney, and the music is downright addicting. You won’t be able to get “Johanna” out of your head for days.

*While this movie isn’t scary, per se, it is on the gory side. Those with queasy stomachs should check out Sleepy Hollow instead—all of the Depp with half of the blood.

Recommended for: a mother-daughter sleepover to make you appreciate the healthy and relatively functional relationship you share.

I make no apologies for including a second Stephen King remake in this list, as the modern Carrie is both a sad yet timeless reminder of the social injustice of high school hierarchies—and a startling warning to bullies everywhere that revenge is a bitch.

Recommended for: a romantic date night for two.

Dim the lights, pour the champagne, and snuggle up on the couch with your man for Tim Burton’s idea of an epic love story. If you don’t find yourself completely drawn into this charming cartoon, making out is always an option.

Recommended for: the weekend before Halloween movie marathon.

When you think of iconic movie villains, I’ll bet Freddy Krueger comes to mind. That’s because A Nightmare on Elm Street, with all of its sinister wit, cheesy death scenes, and ’80s special effects, is the epitome of a slasher classic. But don’t just stop at the first one. There are NINE films included in this gruesome collection, which means a whole weekend of Halloween-esque eye candy.

Recommended for: unwinding alone after a stressful day, glass of wine in one hand and dark chocolate in the other.

Another ’80s favorite, Teen Witch was the high school drama that taught me it’s not only okay to be yourself—it’s the only way to be. Unlike King’s Carrie, who uses her powers to get revenge on school bullies, the female protagonist in TW (16-year-old social misfit Louise) casts a spell that makes her the most popular girl in school… But then quickly discovers how isolating keeping up such a facade can be. Cue epiphanies of self-worth and true happiness. Fun fact: The actress who plays Louise is Blake Lively’s older sister!

Recommended for: spiritual group gatherings made up of twenty-somethings.

The greatest possession story ever told, in my opinion, partially because it’s one of the few that are (loosely) based on truth. In fact, the court scenes feature real-life recordings of the court case that inspired the film. And trust me, it’s scary as hell. But there’s one scene (pictured above) that’s more powerful and discussion-worthy than the rest, and if you’re a believer in Heaven and Hell, you’ll want to stay up all night talking about it with like-minded faithfuls.

Recommended for: GIRLS’ NIGHT IN.

On the hunt for a Halloween-worthy chick-flick? Look no further than Practical Magic, a bewitching drama in which Sandra Bullock and Nicole Kidman play two sister-witches who turn to black magic when their love lives go awry. A little bit creepy, a little bit romantic. And all about that girl power.

Recommended for: this month’s book club meeting, complete with spiked PSLs and bowls of kettle corn.

This may just be the literature-lover in me talking, but I’ve held a special place in my heart for Bram Stoker’s Dracula ever since my 11th-grade English teacher introduced the novel and film to our high school class. With its notorious tale, all-star cast, and grim undertones, it’s the perfect choice for all you vampire fans out there. Plus, you can always read the book beforehand and discuss the differences!

Recommended for: all 31 nights of October, because let’s be honest, it’s really the only Halloween movie you need.

…You had to know it was coming. Hocus Pocus is hands down the BEST Halloween movie of all time. I don’t care who you are, there’s a thousand things to love about this classic comedy—can we just talk about the brilliant one-liners for a second?—and if you were a ’90s kid, chances are you get it. The witty, witchy, and always fabulous Bette Midler, Sarah Jessica Parker, and Kathy Najimi have so much on-screen chemistry, it’s as if they were made for their roles as the Sanderson sisters. And who among us can say they never had a crush on either the sweetly old-fashioned Thackery Binx, the emotionally tortured Max, or the beautiful Allison at one point in time? For these reasons and more, Hocus Pocus takes the cake. So start streaming, sistahs!

What are your favorite Halloween flicks? Tell us in the comments! 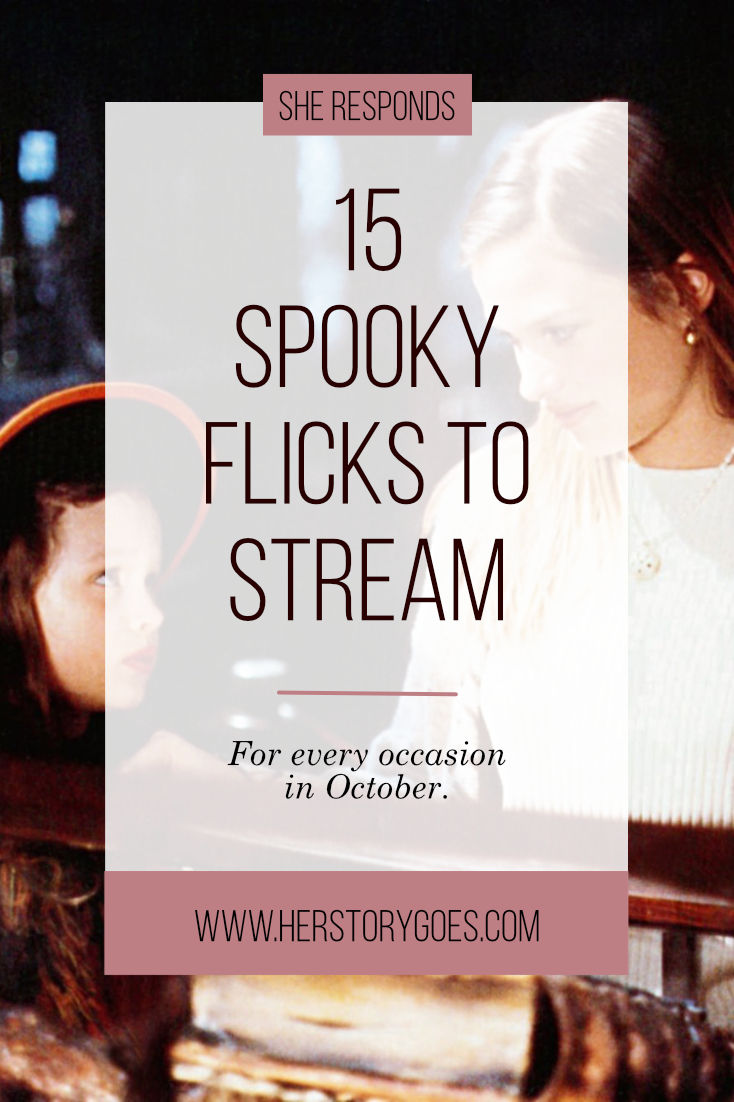 www.emilyblasik.com/
How The ACE Study Shed Light On My Health When Doctors Couldn’t
Confessions Of A (Recovering) Clean Freak

2 thoughts on “15 Spooktacular Flicks To Stream This October”