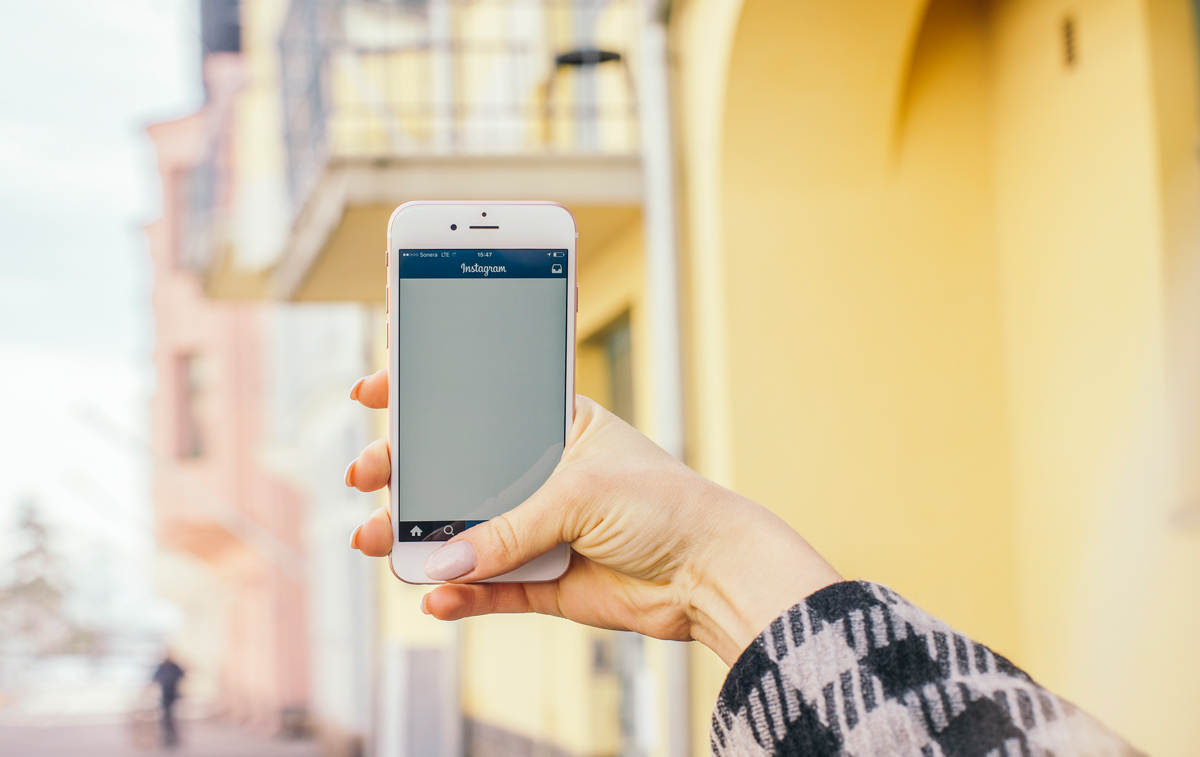 It all began as a joke. At least when I started following @collinkartchner on Instagram, it was still just for fun.

One of my favorite Instagram personalities @becomingjolie recommended Collin’s account for a bit of social media humor. At the time, Collin only had about 8,000 followers—a modest number compared to many of the “Power Influencers” garnering over 100,000.

The shtick was simple—Collin Kartchner, a seemingly normal yet hilarious husband and father of four—pretended to be a wealthy, spoiled, suburban, essential oil saleswoman and “Insta-Mom.”  Hilarity ensued. It seemed Collin never ran low on material or new pairs of women’s sunglasses to use as his disguise. 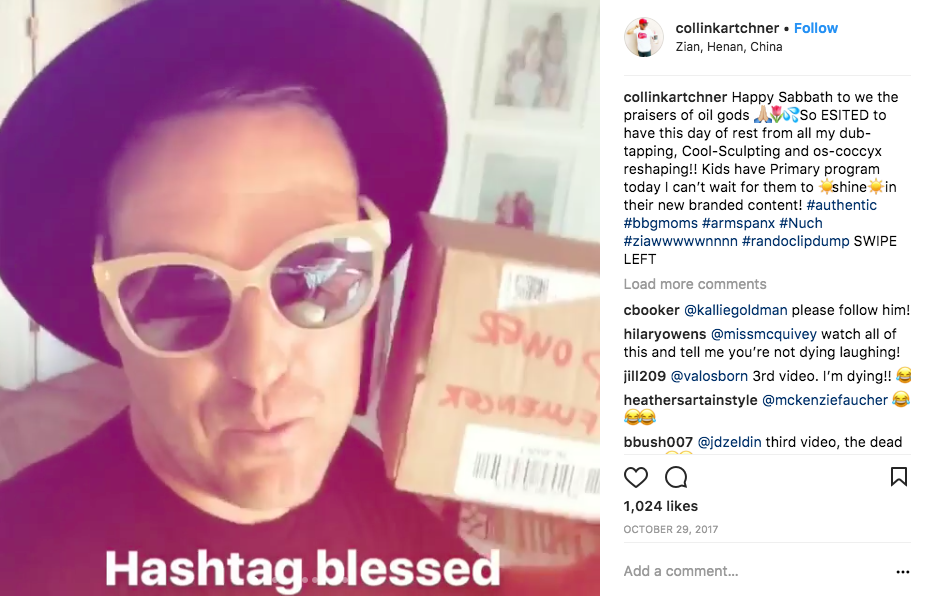 His Instagram feed and stories mocked the very platform Collin used to attract his audience. The culture of perfection that often permeates Instagram and other social media channels became his target, along with the idea that women were desperate to use their accounts to compete with each other. “Tiff” was Collin’s fictitious arch-enemy who notoriously drove a Range Rover and was constantly one-upping Collin with the next best thing—a bigger house, a tinier waistline, and a husband who lavished her with gifts and attention.

Collin’s “Insta-Mom” was constantly obsessed with “schlepping” products on her followers, getting her daily dose of Diet Dr. Pepper (which Collin coined as “nuch”) and making sure she spent at least 8 hours a day “dub tapping” on Instagram while the (fake) nanny took care of the children and household duties. She was known for providing inspirational messages of self-love while driving to her next Botox appointment.

As I watched this daily dose of humor, I felt like I’d finally found an account that could tear down the facade. I have an increasingly complicated relationship with Instagram, uninstalling it from my phone what seems like every couple of months, only to get curious about what my favorite personalities and friends are up to. I’ll reinstall it and get caught up in the beautiful photos and stories all over again, until I feel like it’s hijacking too much of my free time. Uninstall. Rinse. Repeat.

When I recently came back to Instagram, I noticed a change in Collin’s account. Yes, he was still the exaggerated, self-obsessed “Insta-Mom” we all loved to hate, but his stories were beginning to encourage his own followers to unfollow accounts that took a toll on their self-esteem. “Comparison is the shoplifter of joy,” he said. And his followers took heed. Some messaged Collin to say they’d unfollowed over 600 accounts that they’d been religiously following for months, sometimes years. They’d had enough, they wrote. Why were they spending so much time looking at hundreds of images that, at the end of the day, just made them feel worse about themselves? Many confessed to Collin their experiences with depression, anxiety, shopping addictions and marital issues that they felt originated with Instagram usage. Others shared heartbreaking tales of children and teens they knew (often their own) feeling inadequate and isolated, resulting in overdoses, self-harm, and suicide. Searching for answers, these parents often discovered the source of their children’s suffering: social media.

As these shocking messages poured in, you could see a change in Collin. What began as satire now felt all too real. Collin had wanted to poke fun at this image-obsessed online culture, but now it seemed more important than ever to actually do something about it.

So this month, Collin decided to get real. For the first time in almost a year, Collin took off his sunglasses.

He revealed humorous “behind the scenes” secrets including the fact that he never used to drink soda at all. Now, because of the schtick, he actually loves Diet Dr. Pepper. He showed his family’s very messy dining room table and zoomed in on his own face, indicating that nothing on it was fake (except maybe a little leftover spray tan for the winter). It all seemed like Collin’s usual fun and games.

Until his wife (blogger @dearlizzy) informally interviewed him in their living room.

He talked openly about trying so hard to be a good dad, to be a good person and to make the right decisions. He revealed that he had a very difficult relationship with his own father, whom he hasn’t spoken to in over four years. Fighting through tears, he explained that the rage he feels from that relationship is what spurs him to be the best father he can be. At the end of this raw, vulnerable moment, with glassy eyes and a small smile, he looked into the camera and said, “So this is me. Who are you?”

I sat in bed, quietly crying over this man’s testimony. He had turned his elaborate joke into a truly powerful message of authenticity.

When I began writing this article, Collin was busy updating his series of stories not only with followers changing their attitude toward Instagram, but also power influencers and heavy-hitters of the industry coming forward with messages of #thisisme, showing imperfect, unfiltered aspects of their lives they have never shared before. It seemed the tide might be turning—a quiet revolution literally starting overnight.

Inspired by Collin’s honesty, I unfollowed every account that made me feel inadequate in any way. Gone were images of perfect vacations and designer homes. Gone were hair and makeup accounts that always made my messy bun and five-minute beauty routine seem silly. Gone was the daily flood of images I felt I needed to live up to. Like so many of Collin’s “Collowers,” I was happy with my own life and the wonderful things in it. I was happy with me.

After this long-overdue social media purge, I felt lighter. Freer. I silently reclaimed contentment, and in this crazy world, that tiny act felt like a very powerful thing.

I didn’t delete my Instagram app, however. After all, I wanted to see the progress of one account. I knew Collin was still doing great things.

But just when I thought he was in it for the long haul—a virtual social-media therapist for so many—he began posting his final stories. Collin explained that he began the account because he knew countless people in his own life who were affected mentally, emotionally, spiritually, and financially by Instagram. He simply wanted to shine a light on it, just for fun, but also for perspective. He never expected it to last as long as it did. Collin even used his platform to raise thousands of dollars for hurricane relief and for children in his community battling cancer.  Once he got started helping others, he didn’t want to stop. The fact that his joke persona could make a difference kept him going.

But now, he was stepping away from the app that made him famous. In his parting thoughts, he challenged his followers to do the same.

He also left a message “to the people who this past week have attacked [him] publicly or privately.” He forgave them. Perhaps these difficulties to which he alluded had more to do with his Instagram hiatus than any deep revelation regarding our technology addiction, but I couldn’t help but be struck by his final conclusions. 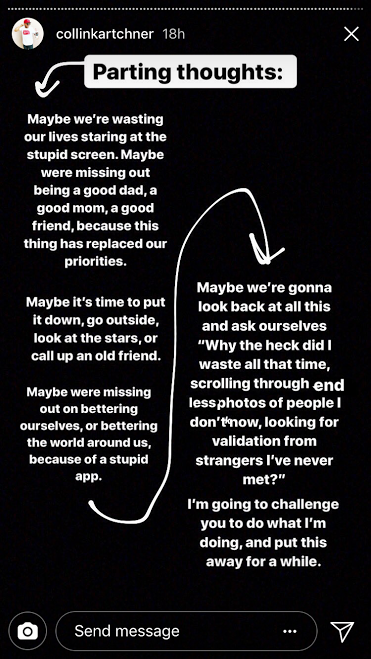 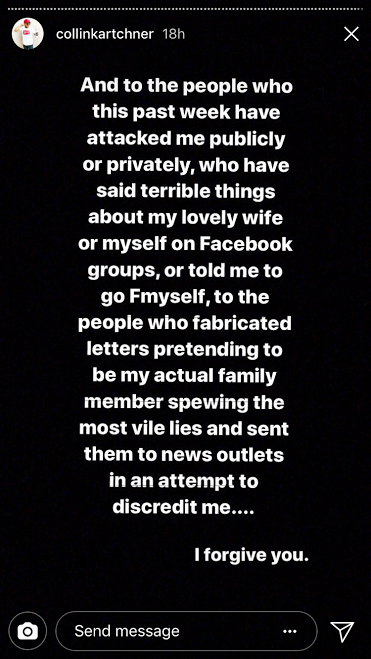 “Maybe it’s time to put [the screen] down, go outside, look at the stars, or call up an old friend. Maybe we’re missing out on bettering ourselves, or bettering the world around us because of a stupid app.”

It seems so simple. Yet in this culture of constant connectedness and fear of missing out, it is far easier said than done. For avid Instagrammers, it’s a habit that’s hard to break.

But Collin, who is out there enjoying some serious quality time with his precious family, left me with the knowledge and the hope that an alternative exists.

An alternative of joy. 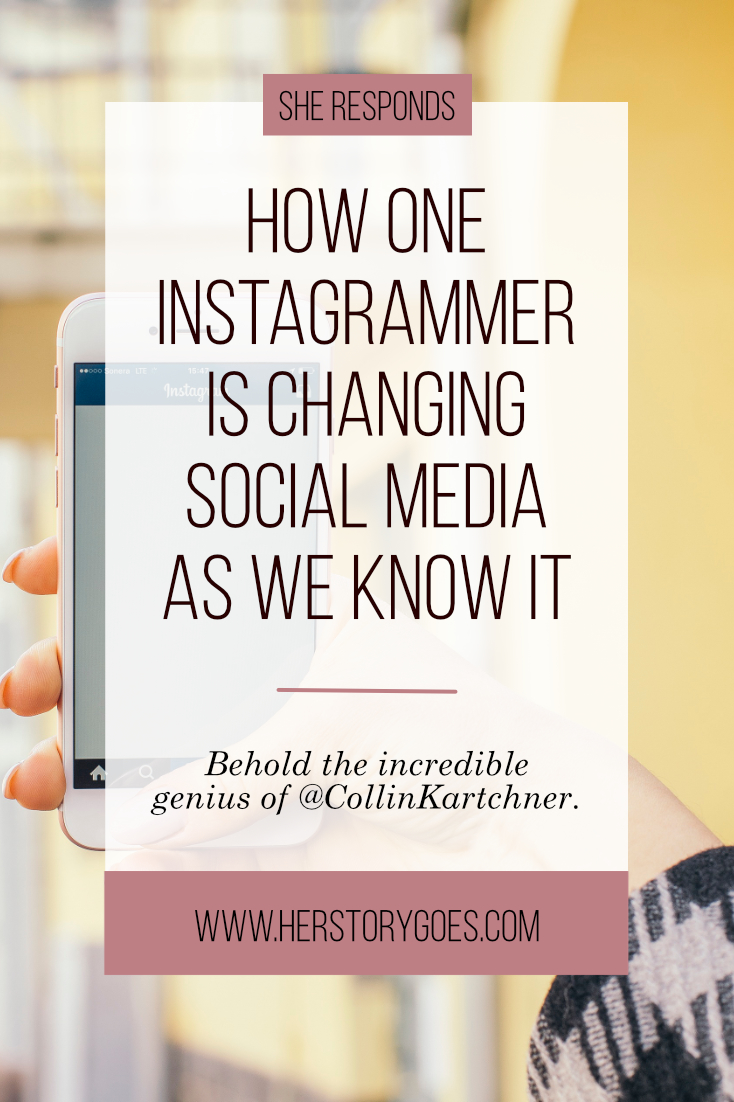 kristenelizabethjones.com
My Best Laid Plans Were Nice, But Then…
Jogging Is The Worst, Part I